The mystery of the showgirl 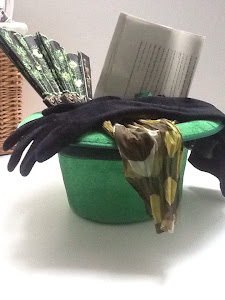 I was always taught that performers should keep an element of mystery about them. So just like a magician doesn't give away the secret to their tricks, a dancer shouldn't appear in full costume except on stage.

This is probably fine if the performance takes place on an actual stage with the niceties of dressing rooms. However I suspect that for the majority of dancers such things tend to be a novelty.

While dancing in public as a adult I've performed outdoors more often than in. It's definitely performance area rather than stage. Dressing room is usually the ladies loos. British summers being what they are it's more a case of keeping the rain off your sequins than worrying about sunburn.

There also tends to be a fair bit of hanging around waiting for the local majorette troupe, dog handlers or terrifying professional school of dance to finish.

And burlesque gear doesn't particularly lend itself to much movement. So although the idea of throwing on some jeans to go with a corset is appealing, the reality is less so. To get straight to the point you can't bend over in a corset very easily. And let's face it an elastic waistband doesn't really go with the image.

Consequently I've been giving some thought to how I dress appropriately before and after burlesque performances ensuring that I am glamorous, mysterious and above all warm.

I recently found myself wearing fishnet tights, green pumps, a frilly burlesque skirt, and a fleece top in a effort to stay warm pre-performance. My short dressing robe just wasn't covering enough flesh to prevent it turning blue so I opted for the Tank girl look.

Or maybe I should just go for one of those towel arrangements where a drawstring at the top of the towel forms a kind of tent. It won't be glam but it will be warm and whipping it off will signal the start of the show!

Posted with Blogsy
Posted by Unknown at 21:31