My weekend - sewing, Chanel and the illusive muse

I don't know about retail therapy but Friday night I engaged in a little online shopping and bought the midorigreen.co.uk domain. I don't have a major plans for it at present. In fact all I've done it put a forward on it to this blog. 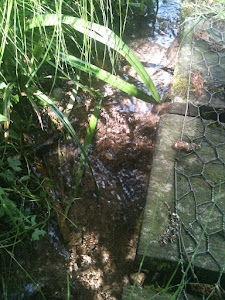 Saturday I enjoyed my usual walk. The stream that runs alongside part of th footpath was unsurpringly high and I made it back just before it started raining again.

I spent Saturday afternoon making a Princess and the pea playset as a birthday gift for my niece. I actually found it really hard going. I was originally inspired by various blog posts I'd read about such sets. I pinned a number earlier in the year. Then Mollie Makes put a version on their front cover and I thought I'd have a go at at that version.

What I realised, as I struggled through a mound of limbs, non- fitting doll garments and the feeling I was engaging in some form of voodoo, is that I'm not keen on anything requiring precision. I much prefer to take pieces of fabric and see where they take me. To let them 'talk' to me if that doesn't sound too pretentious. Interestingly there was a post about exactly this feeling on whipup.net. As the post says just because you capable of doing something doesn't mean you should or that it will be creatively satisfying.

The creation of the doll on the right inspired by the sewing in no man's land blog among others was creatively fulfilling. 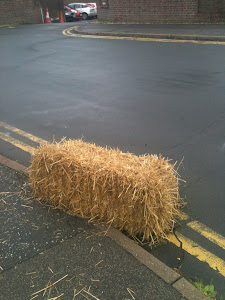 Sunday morning I got up early in a bid to avoid the rain at my allotment. Alas I got soaked to the skin harvesting raspberries, strawberries and peas. I was surprised to find this hay bale lying the street. Not quite the debris of a Saturday night that one might expect.

I spent the afternoon at a Burlesque class. Early evening I settled down to watch Coco before Chanel. I'd planned to do some hand sewing while I watched but forgot that with subtitles you have to keep your eyes on the screen. It wasn't too much of a hardship though ad it was a great film - really elegant and visually pleasing. It did give me a major urge to sew. Like watching a cookery programme and getting an urge to cook and eat.

Posted with Blogsy
Posted by Unknown at 21:44

Email ThisBlogThis!Share to TwitterShare to FacebookShare to Pinterest
Labels: allotment, auntiness, burlesque, dance, it inspires me, sewing, weekend antics, What I did

Funnily enough, even before reading the body of text, my eye was drawn to the doll on the right...lovely post, as always x