What's in my lunchbox today? 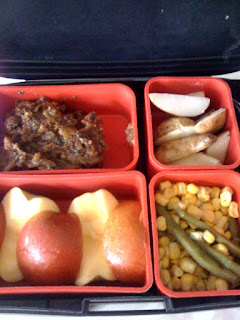 I planned this entire lunchbox around some over seasoned soup that I was convinced I had in the freezer. Guess what either it's hidden behind a wall of ice or I used it up already. Time to get back to 'what's in the freezer' lists.

Boiled potatoes - fresh from the allotment.

Sweetcorn (lovely and sweet, and locally grown but not by me) and runner beans (grown by yours truly).

Apple -Local and in season!

Sausage casserole - this was based on a recipe from Quorn leaflet. It was a master of subsitution as I realised that I was either replacing ingredients (mango chutney instead of redcurrant jelly) or missing them out altogether (red wine). However despite it's very brown and solid appearance it's quite tasty. I thought the sausages had melted into the other ingredients but actually they have retained they shape and texture under the other ingredients.