What's in my lunchbox this week? - bonfire leftovers 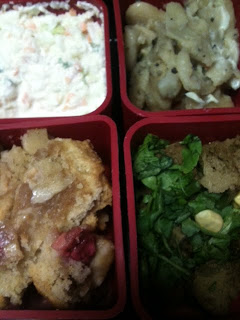 Saturday night we introduced my niece to the dubious delights of fireworks. My sister prepared loads of food including vegan friendly baked butter beans, jacket potatoes and corn on the cob. I bought along a pot of vegan coleslaw and my mother made vegan chocolate cake. There's no cake in this post because I ate it way before it had a chance to make it to the lunch box.

Clockwise from top right:
Baked butter beans - made by my sister. I love these. They are very garlicky and very good.
Watercress, sweetcorn and seitan - I had to put my latest purchase of vital gluten flour to work. I really wanted to steam it but lost my nerve and went for boiling. Maybe next time.
Gingerbread Apple pie - With no ginger (again) and the addition of raspberries. A great way of putting to use the windfall apples I collected while out walking.
Coleslaw - Not sure what I did with the recipe but it had a slight sour cream taste to it. Making me crave a jacket potato though!
Posted by Unknown at 20:33

Email ThisBlogThis!Share to TwitterShare to FacebookShare to Pinterest
Labels: auntiness, leftovers, What I ate