What's in my lunchbox this week? - My cooking mojo takes a holiday 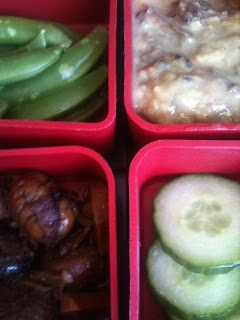 Sometimes it seems that my cooking mojo just packs its bags and leaves for the weekend. I spill ingredients everywhere, over cook things and even when I follow the recipe things just don't turn out right. Happily my interest in experimentation hasn't vanished so I was able to make over my mistakes and end up with something slightly more than just edible.

Autumn trifle - I decided to make Zucchini bread from one of the Sarah Kramer books and somehow it went straight from bread to bread pudding. Rather unfortunate as I was going to take it share at a pumpkin carving party the next day. So I sliced a banana in and made some soya milk custard (which boiled over in the microwave) and came up with this take on trifle. It's actually rather good.

Cucumber - the fruit and veg stall I go to on Saturday morning's was closed this week so I picked up a few bits in the Coop instead including a cucumber that wasn't encased in plastic.

Chestnut stew - I bought chestnuts a few weeks a go and totally forgot to cook them. So this weekend I decided to roast them but cooked them for too long. They weren't quite rock hard but... Happily I'd read A Vegan Obsession's post about Chestnut Hotpot so I threw the chestnuts in with onions, garlic, carrots and stock. It came out yummy and the chestnuts softened up.

Snow peas - another Coop buy - I'm a sucker for the reduced section although I've gotten better!
Posted by Unknown at 20:56

The trifle was definitely a hit with us....I found Carl hunting for the leftovers in the fridge! Hope you had fun at the O2 x