What's in my lunchbox this week? 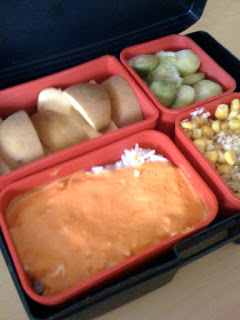 A week with nothing from Vwav and no white cabbage! What happened? It’s simple –the vita-mix has arrived. I’m completely terrified of it and attempting to overcome this fear by blending anything that happens to by lying around the fridge.

Clockwise form top left:
Apple – no vita-mixing involved.
Brussels Sprouts – no vita-mixing involved.
Parsnip, sweetcorn and vegan mayo – the parsnips were ground pretty much to sawdust in the Vita-mix. The mayo was whipped up in the Vita-mix using soya milk. I didn’t add as much oil as I should be I suitably impressed to be thinking that I’ll be making my own mayo from now on.
Rice with Cashew cheese sauce – this is a mix of a recipe from the Vita-mix cookbook and the garden of Vegan. The alarming colour is due to a roasted red pepper. It tastes good if not amazing. One to play around with a bit.

I haven’t abandoned Vwav entirely. I shall be making vegan cupcakes for a gathering at the weekend and have a recipe in mind for lunch next week. By then I may have got to grips with my fear of the fierce sounding motor.